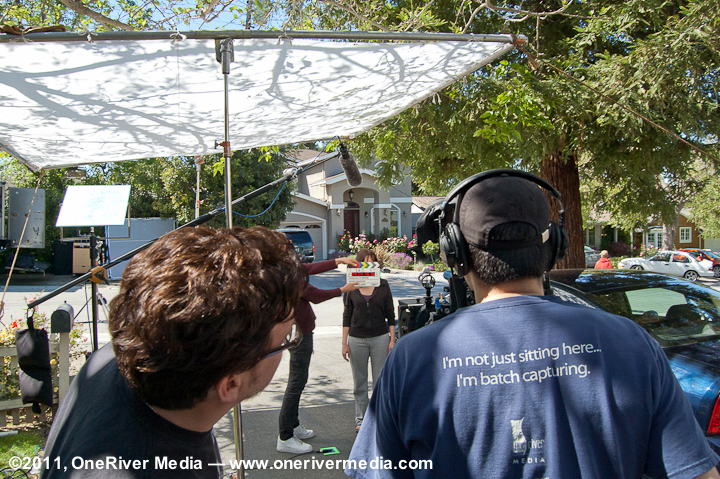 Directory, David Valentin, and Director of Photography, Marco Solorio getting ready for a take.

On April 29th, 2011, we ventured out to Menlo Park, California to shoot three commercials in one day. Yep, three. In one day. Craziness indeed. But to make a long blog short, the footage looked great in the end, and the client was pleased with how it was looking. We were going for the cinematic look-and-feel and we’re pleased we accomplished that.

A big thanks goes out to Ravelco for the opportunity to shoot these commercials for them. If you don’t know who they are, go check them out. Over 4-million anti-theft units installed, and they’ve never had a vehicle stolen! Best automotive anti-theft device on the market, bar none. The Operation
Ravelco called on about eight production companies to bid on the project. As it got widdled down, it was between OneRiver Media and another company. In the end, OneRiver Media ultimately won the bid for the entire project, for both production and post-production. The Camera
Because we wanted to go for a cinematic look, I decided to use our Canon 5D Mk II as a base, coupled with our large selection of Canon L primes. Interestingly, we ended up only using four different lenses for the entire day; 35mm f/1.4L II, 50mm f/1.2L (used for most of the production), 85mm f/1.2L II, and the 135mm f/2L.

Because we’re shooting at 1080p24, I always kept the shutter speed at 1/50, the closest setting the 5D Mk II gives us to the optimum 1/48 filmic shutter speed. Centered is the 5D Mk II "cine rig" with the 3-ton rig truck behind it.

For the majority of shots, we shot wide open at the lenses’ fastest speed, giving that narrow depth-of-field we were gunning for. Anywhere from f/1.2 to f/2, tops, but we usually stayed around f/1.2 and f/1.4. We weren’t noticing any softness or chromatic aberration (sometimes encountered when shooting wide open) in the types of shots we were shooting, so we kept it wide open most of the time.

To help with exposure control coming into the camera, I used a combination of Panavision-sized 4×5.650” ND filters at the front of the Hyson Films 4-stage mattebox and a Singh Ray Veri-N-Duo that has both variable ND filtration and a circular polarizer. I used the variable ND portion to dial in just the right amount of exposure, and I used the circular polarizer portion to dial in just the right amount anti-reflection on the car while also making the sky richer. The Singh Ray Vari-N-Duo is one of my secret weapons that I absolutely love using. It’s one of those indispensable tools I cannot live without. HD-SDI driving our TVLogic LVM-071w and video village from the 5D Mk II.

With all the exposure settings in place, we were able to dial in white balance. We shot a chip chart at times to ensure everything would be consistent in post-production.

For video monitoring, we sent the HDMI output to our Blackmagic Design HDMI to SDI mini converter (mounted to the 5D rig), which drove both our TVLogic LVM-071W (also mounted to the 5D rig), as well as a fifty-foot HD-SDI feed to video village which housed a Samsung 24-inch LED display, driven by an AJA HDP mini converter that also de-embedded the audio that drove a 4-channel distribution headphone output. The above setup now seen through the 5D Mk II.

The nice bonus too is that since the Zoom H4N is the recording device, we can monitor all four audio channels with headphones while we record. My only gripe about these small recording devices is that none of them offer timecode in or timecode out with a dedicated port. But it’s not a deal-breaker and the device really works well otherwise. A sample from our storyboard as used for the production

The Scenes
Everything was storyboarded out prior to the shoot so we clearly knew what we had to shoot, how it had to be shot and how many angles. Director David Valentin roughed up the “chicken scratch” version, and I then took that, added a little more detail to make it a clear and concise storyboard that we could follow along on set. I used a combination of Newtek Lightwave 3D and Poser 3D to create the storyboards. It’s a nice combination that allows me to create 3D models or modify existing 3D models in Lightwave, while using Poser to articulate the 3D actors.

The day was split into three portions, each portion covering the commercial we had to produce. The morning portion was an exterior scene that was outside in a neighborhood driveway. The afternoon portion was another exterior scene for a backyard barbecue setup. The last production of the day was indoors in a master bedroom for a at nighttime setup. One of my favorite lit shots of the day, as done by light director, Carlos Lopez. Marco Solorio on camera. Alex Alensandro Garcia getting ready for his action cue.

As expected, the two exterior productions required more lighting control than the interior bedroom scene. Carlos Lopez was our lighting director and really pulled some magic tricks.  We were losing the available light on the afternoon backyard barbecue scene, but Carlos was able to extend the “golden hour” sun until the last shot was needed.

The day was long but the footage turned out beautiful. Everyone did an excellent job on set. We’re looking forward to post-production; the editorial stage, sound effects and mixing, color-timing and grading.

Stay tuned, as we’ll post links to the finished commercials as they’re released for broadcast.

EDIT: Here is one of the finished commercials, uploaded to our Facebook page: Additional photos from the shoot:

Please note this particular blog post is in the process of being ported over to our new theme format. Some formatting, images, and short-codes may be missing, or misformatted until the switch is completed. Please check back in a couple of days to see if this blog post has been fully updated.
– OneRiver Media (January 20 , 2021)