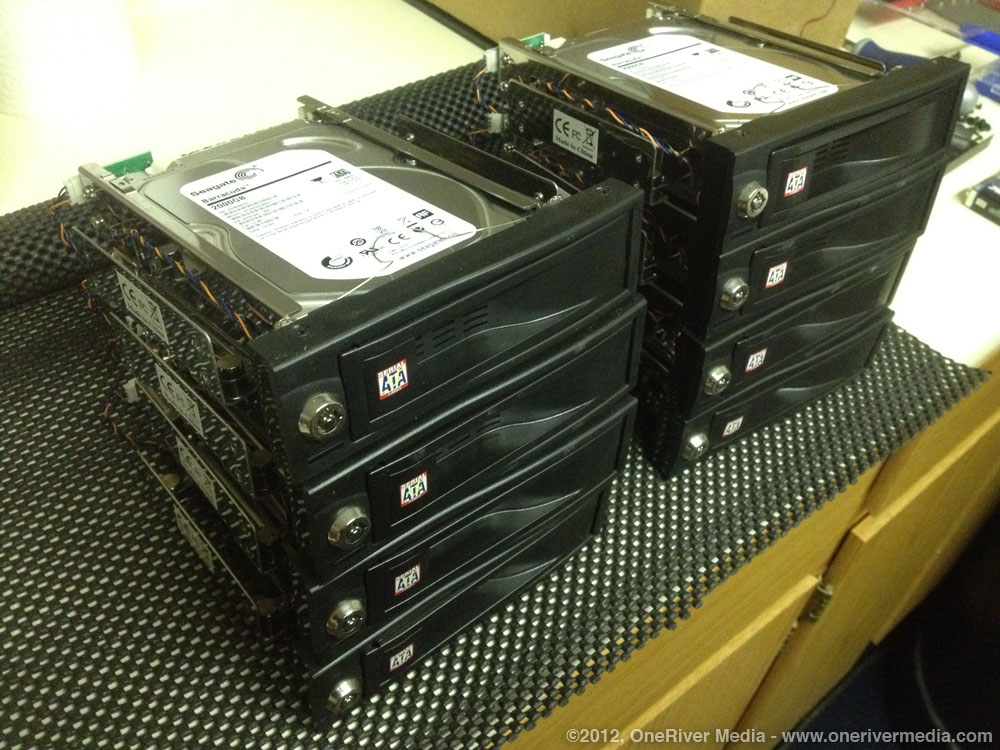 I posted a picture earlier today on Twitter and Facebook about the latest RAID setup I’m building here at the facility, and ended up getting some questions about it, so I figured I’d post a quick blog post on what hardware I’m using and how I put it together. Newly installed RAID with final testing before putting the lid back on.

Building your own RAID is a lot easier than in year’s past, and quite affordable too. Not to mention it’s fun to get your geek on. I’ve been using HighPoint RAID hardware on Mac OSX and so far it’s been 100% completely rock solid. Oddly enough, some of the product info on HighPoint’s website doesn’t reference Mac OSX support alongside their Window, Linux and FreeBSD info. But rest assured, it’s been working flawlessly on our MacPro systems (at least on Snow Leopard, and am now just getting it installed on Lion). Loading up the drives from the bottom up. Triple fan bay at the bottom to help with airflow.

I’m using a standard, off-the-shelf 9-bay hard disk drive tower that you can just about get anywhere (just make sure it’s got a Centronics Mount Compliant hole to fit the storage controller board). It uses a standard 300-watt power supply, which is enough power needed to run the eight Seagate drives, all of the fans, and the RAID controller card. The only “mod” I did to the case was to replace the rear screws that keep the outer casing on with blue-anodized thumb screws for easier/faster disassembly.

For this setup, I’m using 2TB drives, but it’s compatible with 3TB drives as well. I’m using RAID 5, which in the end gives me 14TB of storage from 16TB space of original space. The RocketRAID card I’m using supports RAID 0, 1, 5, 6, 10, 50, and JBOD. It also supports two physical array units (each unit supporting a maximum of eight drives), so you could have 16 drives at 3TB each for a total of 48TB. Even though the RAID 5 setup gives me some protection, I still keep any media I want on a backup/archive Drobo Pro system.

To setup your RAID, HighPoint supplies a little app that basically launches your web browser to a local URL on your workstation. The browser is basically the interface to setup and modify your RAID. It works well, but is a little sluggish to refresh in my opinion.

Here’s a breakdown of all the parts I’ve accumulated to get this together. Note that this setup is derived from an old setup that once housed eight 300GB drives, so I’ve added a few things along the way (not just the drives themselves).

Here are some iPhone snapshots of my build along the way. I didn’t plan on writing a blog about the process and taking pictures of it, so these will have to do!

The original image that started the interest and turned this into a blog post! Bare Seagate hard drives in their trayless caddy holders. Much easier to replace bare drives like this than to screw them in and out. Inside of enclosure looking down at EJ220 storage controller board Our break room doubles as our RAID installation room! All eight drives are loaded and ready for testing. Hidden amongst the cabling is the HighPoint RocketRAID 2722 PCIe controller card beneath the AJA Kona card in the MacPro tower. After initial testing, the enclosure was easily sealed back up with the thumb screws (can't recommend these enough!). Note the large fans to dissipate the heat (I recommend as many fans as you can fit in your enclosure to prolong hard drive life). The SFF-8088 cable is plugged in. Above that are a pair old eSata connections that are no longer used.