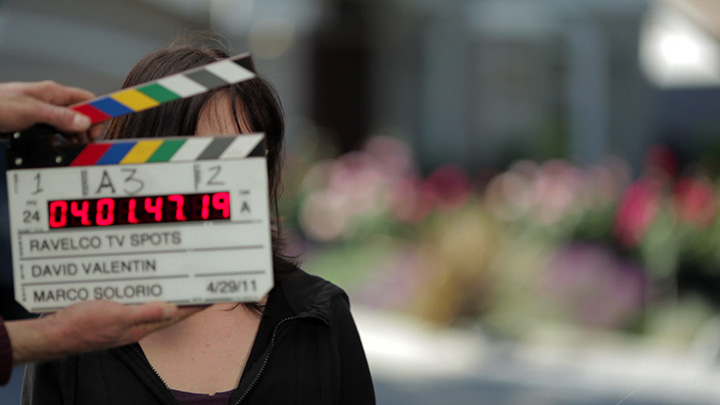 If you’re interested in shooting your HDSLR cameras with timecode, it’s a lot easier than you might think. This article describes the method I’ve developed and use on sets to have the same running timecode across multiple cameras, double-system sound recording, our wireless digital slate, and the wireless ScriptBoy.

Let me first say this isn’t a replacement for plugins like PluralEyes that automate the synching between multiple cameras and sound. I still use PluralEyes and love it immensely. But there are times you need timecode on set so it can be referred to later on. A prime example is when you have a person on set recording marks on the shot list so that the editor knows which takes were the best, or what pickups to use. The best way is by means of timecode, especially if you have long takes with no cuts and many pickups.

A second disclaimer is that this process is not frame accurate, but is very close; usually within a quarter of second of accuracy (go to the end of this article for the frame-accurate method). But if your main purpose is to track and match marks against a shot list, then this accuracy is more than adequate, to which I call the “soft sync” approach.

So how do we get timecode working with HDSLR cameras? Well, as you probably already know, these HDSLR cameras sadly don’t have TC or genlock ports on them, or you wouldn’t be reading this blog post. So instead, we’ll have to do it virtually. And the timecode itself will be “time of day” (TOD), rather than the typical ascending timecode that starts and stops, akin to ENG style video cameras. And since HDSLR cameras don’t have timecode outputs on them, we’ll need to use a timecode generator unit that will be the master timecode source.

But first, make sure all your cameras on set have the same exact clock setting, down to the second. It’s important that you check and set this every time you start your production day for your cameras. I’ve noticed our 7D and 5D Mk II drift a few seconds apart after around a week or so of time. I sometimes set the clocks on my HDSLR cameras against an atomic clock I have in the studio. A bit overkill since it only technically matters that your HDSLR cameras just have the same clock value, even if the clock doesn’t match the day’s true time of day. But I like to keep things square, so I match to the atomic clock when I can.

The Canon 7D on left and 5D Mk II on right share the exact same atomic date and time, down to the second. Note they're being displayed in military time.

Next, you’ll need to buy yourself a timecode generator. You’ll need to make sure you get one that does SMPTE timecode with some kind of LTC output, and one that will allow you to change between 29.97/30 FPS and 24/23.976 FPS. I purchased a used TimeLine Lynx Timecode Generator from eBay for a mere $20 plus shipping. I have several timecode generators in the facility, most are rack-based units, but I like the Lynx because it’s somewhat compact and has a built-in LED display of the timecode on the unit itself, which I would highly recommend with any timecode generator you end up buying. Out TimeLine Lynx timecode generator is that master timecode reference. Note the 24 FPS frame-rate to match the footage being shot.

You can also check out the app called, “Jumpstart LTC” which lets you set and output LTC timecode from your iPhone, iTouch or iPad.

So now the timecode generator is essentially the master timecode clock of your HDSLR camera(s). From here, you can hook up whatever timecode slave units you need to it. I usually split the timecode output from the generator to our wireless digital slate, the wireless Script Boy, and to double-system sound recording (like a Fostex PD-6 we’ve used on set). Remember that the LTC output is essentially an analog signal of sound (sounds kind of like a modem). If you get an overly hot signal out of your TC generator’s LTC output, then try using a passive audio attenuator to lower the level. Works like a charm. Now the cameras, the audio recording device, the digital slate, and the Script Boy all have the same timecode. Once again though, you’ll probably still want to use something like PluralEyes to match the cameras and audio together in post, but now you also have timecode reference for takes, marks, notes and anything else that has been written down in reference to the footage you’re shooting. A major time-saver when it’s time to edit the footage together. And if you’re using Canon cameras, you’ll need to make sure you install the E1 plugin for Final Cut Pro so that it can convert the originally H.264 video file’s TOD stamp into usable timecode. Oh but wait, there’s more!
There is a second method of using timecode with HDSLR cameras (or any video camera for that matter). Instead of hand-synching the master timecode generator to the HDSLR cameras like I’ve done, you can alternatively send timecode from your TC generator to all of your devices, including one of your camera’s mic inputs. This method will in fact ensure frame-accurate timecode across all devices, including your HDSLR camera(s), however, you then need to use a plugin for Final Cut Pro like, “FCPauxTC” by VideoToolShed to extract and implement the audio timecode into the file’s timecode track. Avid Media Composer has a built-in feature that does the same thing if you’re cutting on that. And if you do decide to send timecode to one of your HDSLR’s mic input channels, check out the compact Lockit Buddy to easily balance LTC levels to your camera. This method definitely requires you use dual-system sound recording if you need more than one available audio track in your HDSLR camera, since the other audio track is recording the LTC timecode.

So that’s that. You can either “soft sync” your HDLSR cameras together with your other devices, with little conversion work at the NLE ingest stage, or you can get frame-accurate sync with a little extra work at the NLE ingest stage. For means of shot notation and marking, I prefer the “soft sync” approach. For frame-accurate needs, I’d go with the latter. And hey, if anything else, all the running timecode on set makes you look really cool. Always a good thing when the client is on set making sure their money is being well spent!