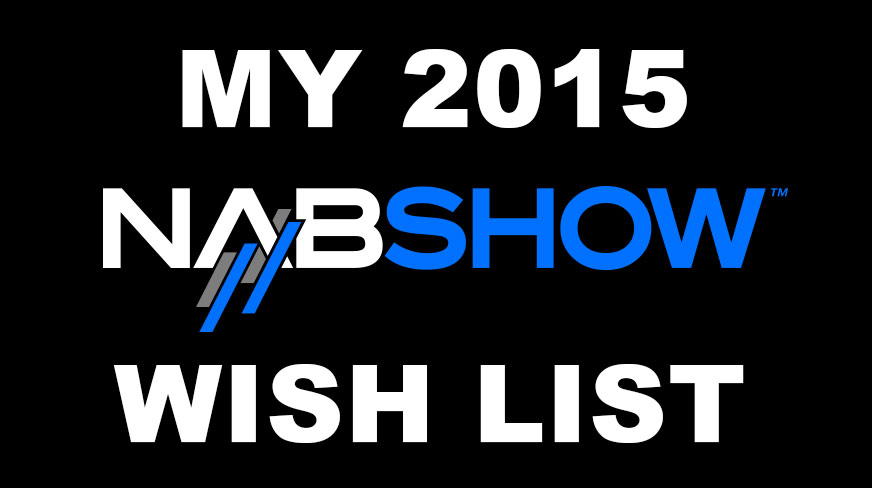 With NAB approaching quickly, I have a few wish list items that I’d love to see come to fruition. I have no insight into any of these and is purely hopeful wishing on my part. In other words, don’t take any of this as rumor or pre-announcement leaks… they are NOT. I’m merely sharing what I hope to see at NAB and nothing more.

[title type=”special-h4-left” color=”” animation=”” animation_delay=”” class=””]Blackmagic Design URSA Sensor Upgrade[/title] I’d love to see a new sensor design come from Blackmagic Design for the URSA. When the URSA was originally announced at last year’s 2014 NAB, Blackmagic did elude to the notion that a new sensor was on the horizon, they just didn’t have details as to exactly what. Since part of the URSA’s design is the removable sensor/lens mount, known as the, “Turret”, it only makes sense that a new sensor will come at some point.

What would I want to see in this sensor? For starters, I’d like to see true DCI 4K (4096×2160) as a minimum resolution. I wouldn’t consider myself a “resolution junky” but I am a firm believer in higher resolution formats to use as a creative tool for your lower delivery format. For the last couple of years, we’ve shot mostly in 4K even though we primarily deliver to 1080 HD. But since we’re starting to deliver in 4K, I’d love to have the option of 5K or 6K as an over-sized creative tool, like we do with 4K for 1080. This isn’t a huge requirement, but eh, it would be cool nonetheless.

I’d love to see more dynamic range (15 stops minimum would be great), greater sensitivity (base 1600 or 3200 would be killer), all wrapped in a global shutter that we’re accustomed to with the URSA’s current sensor.

But to go a step further, it would be really cool to see Blackmagic wow the crowd (again) with all of this in a 4:3 full-frame sensor (4:3 for anamorphic use and cropped for 16:9 for everything else). Although I’m completely fine with Super35 16:9, it would be nice to have the option to use full-frame lenses in some situations and a crop-mode for S35 lenses.

If this can all be accomplished with amazing color science that is akin to the ARRI Alexa (to which the original Cinema Camera isn’t drastically far off), then a sensor such as this could be truly ground breaking since it’s housed in a $6000 camera.

[title type=”special-h4-left” color=”” animation=”” animation_delay=”” class=””]Affordable Cinema Zoom Lenses[/title] There’s a wide open market that has been untapped for years now and it amazes me that nobody like Rokinon, Tamron, and Sigma have ventured into it. The closest affordable cine style zoom lens is that of Sony with their FE PZ 28-135mm f/4 G OSS lens for the Sony FS7. The concept and price of this lens is fantastic (lacking electronic zoom performance notwithstanding, but that can be better engineered). It has a decent zoom range with what appears to be a truly constant aperture (no dipping at the long end like most zooms do, even if marked as constant aperture).

If a company could implement their existing optical technology, ensure it’s parfocal, has constant aperture, is truly manual (zoom, focus, aperture), with long focus throws and silky smooth operation, all housed in a geared housing… it’ll fly off the shelves. Tokina entered into this market (11-16mm T3, 16-28mm T3, 50-135mm T3), but the pricing of their cine zoom lenses is still a bit steep (at least their longer zoom models), especially compared to what Sony offers for its E-mount users.

[title type=”special-h4-left” color=”” animation=”” animation_delay=”” class=””]Affordable High Frame Rate Acquisition[/title] I’d love to see a truly affordable camera that can shoot at least 1080 HD at 1000 FPS. Something with either an interchangeable lens mount, or at least Canon EF, Sony E, or PL as an option. Can even be a fairly compressed codec, even in 8-bit space. Just something to shoot simple HFR shots but not necessarily requiring a Phantom rental. [title type=”special-h4-left” color=”” animation=”” animation_delay=”” class=””]Color Grading Panel[/title] For the last few years, I’ve been hoping to see a new control surface panel for color grading that implements more quick-keys and encoders than what is available today in the ~$5k range. Something that offers more than the current panels do, but not as large (and costly) as a DaVinci Control Panel. In a sense, I wish Blackmagic Design would create a “Mini DaVinci” for lack of a better term. Maybe Tangent, Avid or JL Cooper will surprise us with something new. [title type=”special-h4-left” color=”” animation=”” animation_delay=”” class=””]Affordable 5.0 / 5.1 Surround Microphone[/title] Would be great to see something from the likes of Rode that offers an affordable 5 or 6-channel microphone specifically for ambient surround sound acquisition in a compact unit. There are some units available today that start at about $1000, $2000 and beyond, but for something we don’t use all the time, it would be nice to have an affordable option that we can toss in the bag and record to our Tascam DR-680.

I have a few other wish list items, but I’ll keep it to the above list for now. What are you hoping to see at this NAB? If you see me on the NAB floor drooling over new gear, stop and say hi!

Please note this particular blog post is in the process of being ported over to our new theme format. Some formatting, images, and short-codes may be missing, or misformatted until the switch is completed. Please check back in a couple of days to see if this blog post has been fully updated.
– OneRiver Media (December 3 , 2022)