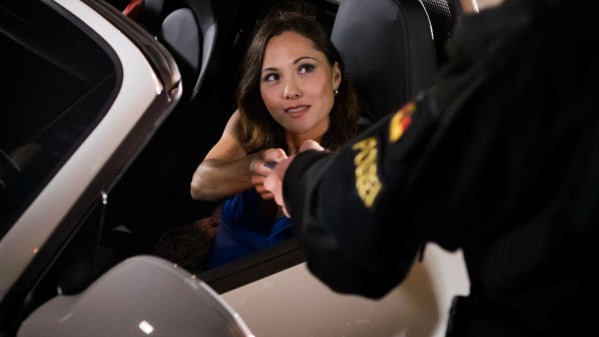 As they say, you only live life if you take chances. We uploaded our short video, “Texting is Gefährlich” to Vimeo, knowing it would probably be the first Cinema Camera video out there, scrutinized by everyone on the planet. Honestly, this is a scary, and daunting idea, especially when our production was focused on really pushing the new Blackmagic Cinema Camera and testing its range. To be a critic is easy, to be a pioneer is frightening.

Our hope is to show how far we tested and pushed the Blackmagic Cinema Camera under severe circumstances. We opted to not do a golden-hour beauty video, or a glossy grade, but to really push the camera under exterior, low-key lighting, among other scenarios.

Quite honestly, we’re pleased with results, as any other scenario (DSLR or standard video camera), would have fallen apart, due to blown out highlights and crushed blacks. The amount of image data we were able to pull from these shots was astounding.

In so doing, we opted to perform a fairly straight and neutral grade with high contrast, something close to what the camera produced, post debayer and de-log profile. This meant no lavish grades that took away from the root of the original picture.

We even wanted to keep rolling shutter and vibration in there. Mounting the camera on the Porsche with its stiff suspension proved well, and obviously not a typical solution. I almost didn’t want to include that footage, but felt that the audience would want to see ALL shots in their extreme variants. Again, rolling the dice and taking chances.

Could we have created a glossy, lush video under highly controlled environments? Absolutely. But instead, I rolled the dice, took a huge chance, stuck my neck out in front of the world, and uploaded a video that instead shows how far we were able to really push the camera. A glossy video doesn’t always show how well a camera is pushed at its extremes. But then again, gloss is what people usually like, so our next production may be just that as those are fun to produce as well!

Special thanks again to the cast and crew for being a part of this on the weekend and through the late night! As mentioned on Vimeo, this entire production was done in less than a day, from script, to casting, to crew call, to shooting… it couldn’t have been done without everyone on board.

Check out part 2 of this blog topic where we show frame grabs from the video and explain the shot in detail.