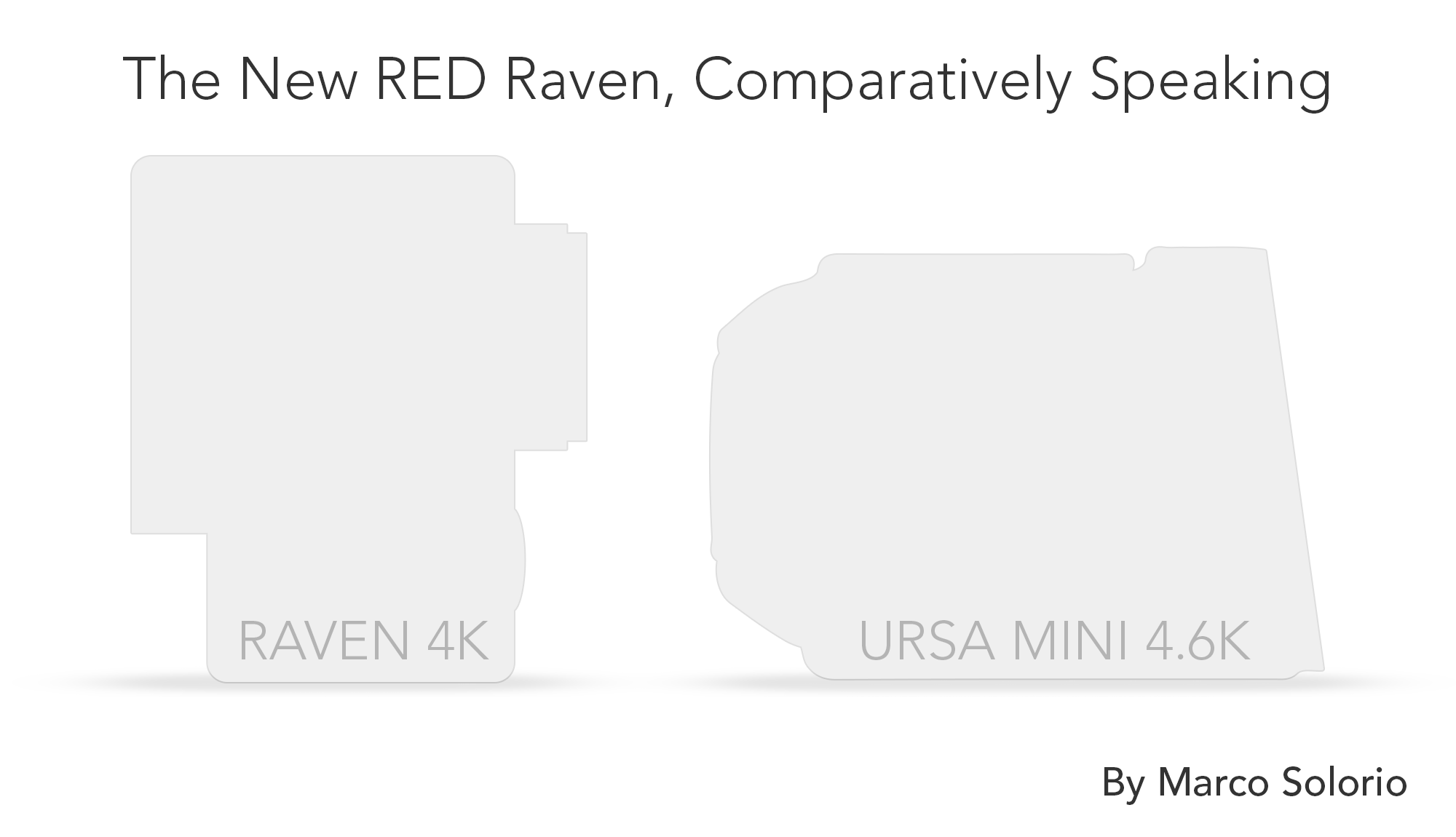 With the never-ending growth of new camera technology, Marco Solorio of OneRiver Media explores the data of RED’s new Raven 4K camera and how it fits in the balance of other emerging camera technology.

I’ve been receiving A LOT of questions from people asking me what my thoughts are between the newly announced RED Raven 4K and (specifically) the Blackmagic Design URSA Mini 4.6K EF. Understandably so since the URSA Mini 4.6K is appealing to so many people. It’s really a tough answer to put into a single answer, simply because the two cameras couldn’t be more different in their approach to shooting footage and by all accounts are comparing apples to oranges. To add, everyone’s production needs are as vast as lens options, so what may work for one shooter, may not work for the next person. But hey, there’s no harm in comparing them anyway, right?

Although I haven’t tested the Raven yet in production, it does look quite appetizing on paper, if you’re okay with a non-removable EF mount on the body (which, for the record, I am). Although the sensor is being labeled as a Dragon sensor, it’s actually a new sensor from RED, so at this time of writing, there’s little information on real-world performance as compared to the Dragon 6K sensor we’re all used to. Understandably so, as I’m assuming RED is probably still optimizing the new 4K sensor.

RED hash-tagged the Raven as, “#4k4all” but in reality, affordable 4K acquisition (at much lower cost than the Raven) has been available for some time now from the likes of Panasonic, Sony, Blackmagic Design, and others. Maybe, “#red4all” would have been more appropriate? Eh, semantics I guess.

The size of the Raven’s 4K sensor is a little smaller than the original Blackmagic 4K sensor and the AJA CION 4K sensor. The Blackmagic 4.6K sensor is the largest 16×9 Super35 sensor in its class, fitting just within the S35 spec.

The price of the Raven starts at $5,950.00, but as everyone quickly realized (and as RED clearly states), this is for the brain only. This basically means the camera is inoperable and still requires one of RED’s expander modules to gain I/O, control, and power, as well as a RED touchscreen or remote to change functions within the camera. And because the Raven uses RED’s new Mini-mag media format, you’ll need to get at least one of those as well (starting at $850 for a 120GB card, or included with the Base I/O Package).

In truth, expect to pay at least $10k to have a functional Raven that is controllable with media it can record to and read from. Still, by RED convention, this is a low cost solution that definitely lives in the RED ecosystem. For existing RED owners that want the Raven as a B or C camera, this is a plus.

Like all modern RED cameras, the Raven is a small cube (I’ve actually always liked this body concept) allowing the user to build the camera as simple or complex as they see fit, specific for the type of production they need to suit it for (typically for cinema style shooting and not as much for ENG style rigging, although not impossible either).

The URSA Mini 4.6K EF on the other hand (with the optional $395 Shoulder Mount Kit) caters more along the lines of an ENG-style body concept, which means just about everything you need is ready to go in a single package, that is both shoulder and tripod mountable without having to switch out parts. Add the $1495 Blackmagic 1080 HD OLED EVF and you have a complete package out the gate. And for the record, I own the OLED EVF and it’s nothing short of spectacular, but that’s another read for another day.

Because of the huge interest between these two cameras (and people asking my opinion between the two), I’ve decided to take the time to put the data side-by-side to really see how much these cameras match up and compare. At least on paper that is. Oh and I threw in the URSA Major 4.6K EF to see how its specs compare as well. Yes, the big URSA is obviously much larger than the Raven (comparing apples to bananas at this point), but the operational cost of the big URSA is still less than the Raven, so I figured I’d throw it in with the Mini.

All this data is available from their respective manufactures, so don’t shoot me, I’m just the messenger.

Fully Operational Base Cost Comparisons with media and reader 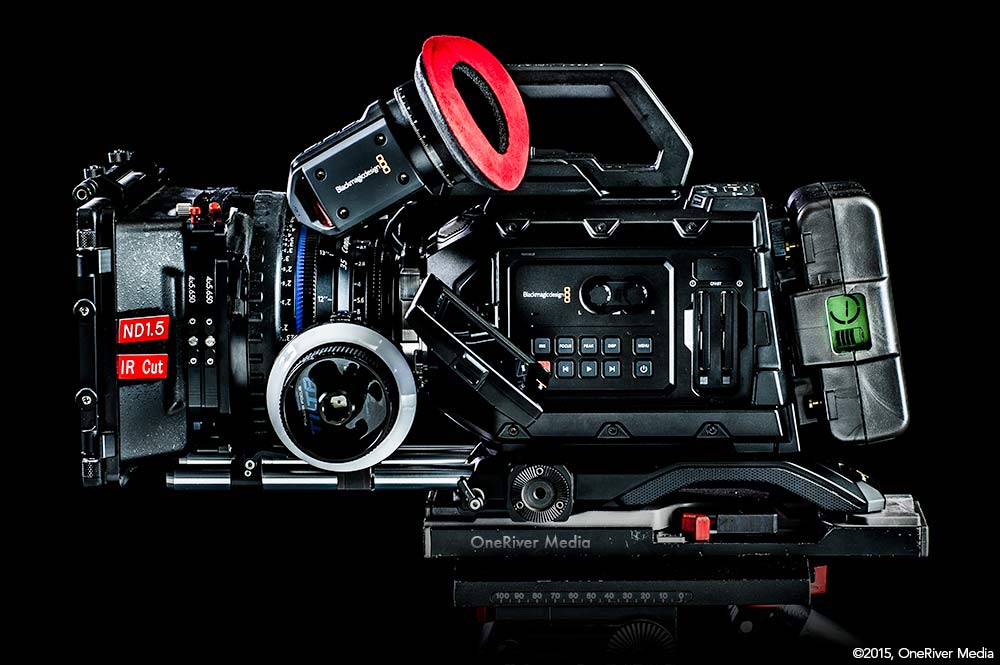 Although in prototype form, I’ve been fortunate enough to test the URSA Mini 4.6K in both PL and EF models. Despite the low cost, the camera does have a ton of features to offer, with a quality sensor that greatly surpassed my initial expectations.

The Raven uses RED’s proprietary Mini-mag format. Although this media is not cheap, it does have a few advantages. The biggest one (in my opinion) is that these Mini-mags are very well built, solid, and designed to thwart the rigors of heavy production use where things can get tossed around by crew. Another benefit is that these Mini-mags start at 120GB and go up to 1TB cards, which is great for those that needs a lot of space for HFR shooting on single cards. On the other token, I’d say cost and bandwidth are probably its only less attractive side however, with 120GB Mini-mags starting at $850.00 (or $7.08/GB) and the maximum 1TB Mini-mag costing a staggering $3,900.00 (or $3.81/GB). Cost aside, write-speeds appear to be limited to about 140MB/s. It’s not totally clear at this point if this is the bandwidth limitation imposed by RED to protect their Scarlet and Epic lineup or if it’s truly a cap on the media itself. Regardless of how the bandwidth limit is set, the Raven doesn’t record to ProRes above 2K and why 120 FPS Redcode RAW is restricted to 13:1 compression.

With the original URSA and the new URSA Mini using CFast 2, there’s been a lot of buzz for the last year on the perceived high cost of these cards. In reality, the cost of CFast 2 altogether has come down substantially since expected competition has gotten into the mix (Lexar, SanDisk, Wise, Transcend) and are ultimately lower cost than RED and Sony media. Originally, the SanDisk 120 GB CFast 2 card was $1,200.00 ($10/GB). Not cheap by any standard. Today, you can get 128GB CFast 2 for $299.95 ($2.34/GB), which is a 73% drop in cost in less than a year. Although the current maximum size is 256GB, expect to see these sizes increase and prices continue to drop in the market. Also worth noting, these CFast 2 cards are extremely fast, with about 450MB/s write speeds in single-slot mode and about 900MB/s write speeds when running dual-slot interleaved mode on the URSA Mini… more than enough bandwidth for URSA’s HFR open-gate RAW shooting (for the record, I shoot 80 FPS open gate RAW on single CFast 2 media with no issue). Lastly, they’re so small that they don’t generate a lot of heat (unlike standard 2.5″ SSDs do) and are super easy to pack up and only consume the bare minimal amount of physical space.

In the end, I think the Raven is a great camera for existing RED owners that want to use the Raven as a B, C, or D camera. The menu structure and operation will be the same as the other RED cameras in the group, so production workflow will be seamless, mirrored, and familiar.
It’ll be interesting to see if the new 4K Dragon sensor inside the Raven will in fact push a full 16 stops, since it has been known over time that manufacturer-stated dynamic range values are, shall we say, a little exaggerated. But even if the sensor pushed a usable 13 stops with low noise and good skin tones, I think it would be a good addition to a RED multi-cam shoot. 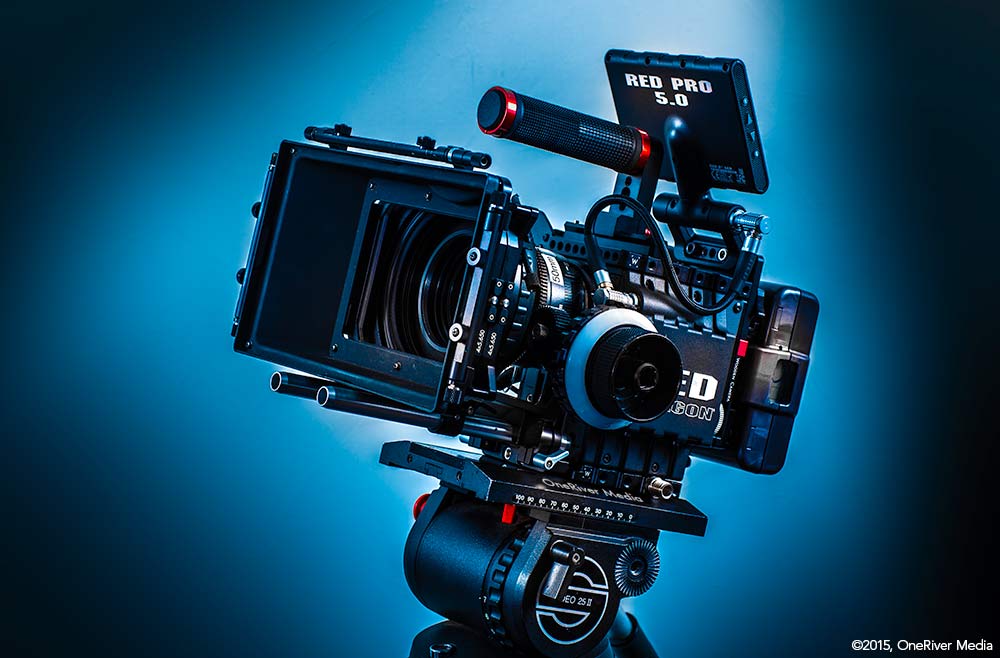 But does the Raven answer the call as an A-camera for new RED users? I think it can, if it meets the shooter’s specific needs. But for the price, I think the Sony FS7 and the URSA Mini 4.6K should be seriously weighed in for consideration, even though by all accounts, the form-factor of the Raven is obviously a little apple-to-oranges as compared to both the FS7 and the URSA Mini (which are much more closely matched to one another for the type of operational shooting they do).

Unfortunately I haven’t tested the Raven in production yet, but I have worked with the URSA Mini 4.6K (EF and PL) in prototype form (as all of us still wait for the public release). If you’ve read my article specifically about the prototype 4.6K sensor, you know that I’ve been incredibly impressed with its results—far above what I was originally expecting.

But like anything, neither one of these cameras are in the wild yet, so until then, all of this is nothing more than paper info and spec wars for those still waiting to get their hands on these cameras. But at the very least, these data comparisons might help give potential buyers of either camera a head start on a little research. As we know, every little bit of added help can be useful when cameras seem to be announced just about every month.